Walkthrough of 94 Percent Game Answers to help you list the words from 2 questions or expressions and 1 photo image of 94% game cheats ! Play 94 percent app from Scimob, the creators of 94 Seconds and 94 Degrees trivia game ! 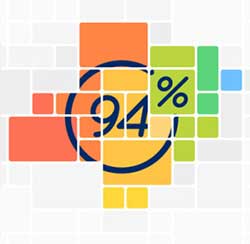 for the first question we have 2 question of fruits with seeds or pits and things you find in a pencil case also a picture of fireman with hose from firetruck, can you find 94% of the given answers ? If you can’t then read all the solutions here :

there are 40 levels available so far, you can search the puzzle questions of your level.. because it’s random so search one of the question and you will get all the answers 🙂
94% thing you wear around your neck – couple – trunk picture
94% things associated with brazil – it’s sweet – women on spa massage picture
94% things used by a police officer – types of music – glasses & laptop on table
94% things you see in sky – adjective to describe height – girl raising hand picture